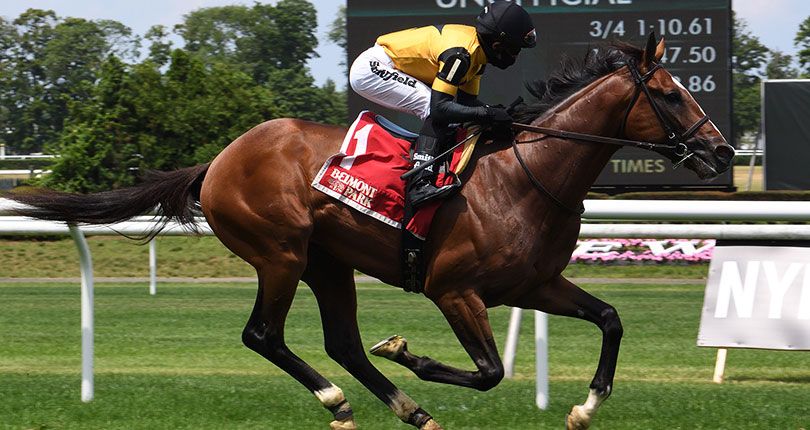 Each and every day at racetracks around the country, players have the opportunity to play a wager known as the pick 5. The goal is to pick the winner of 5 consecutive races, similar to a parlay for those more familiar with sports betting.

Normally this wager applies to 5 consecutive races at a given track, but recently some of the major tracks have come together to create a bet that extends to races at multiple tracks. On a weekend like this where there are no real blockbuster cards, the Cross Country Pick 5 can be a great wagering opportunity to string together a few quality races from different cards.

This week’s cross country pick 5 starts with 2 races from Belmont before heading to Churchill Downs for the remaining three races and is scheduled to begin around 5:10 pm Eastern.

Leg 1- Belmont Race 9: Seek Again Stakes at One Mile on the Turf

American turf racing each and every year is dominated by New York-based trainer Chad Brown who sends out two in this race (Delaware and Flavius). These horses are likely to take money and deflate the pick 5 value. Players will be wise to start their analysis by deciding if they stand with or against the Brown runners.

If Chad Brown isn’t on the ticket, it may be a race where players are able to spread. However, if Chad Brown is included in the picks, keeping fewer horses in the leg often provides value.

Christophe Clement is another prolific trainer who sends out Decorated Invader in this spot with Joel Rosario aboard. Rosario is one of the best timing riders in the country which comes in particularly useful on turf.

New York turf racing does tend to be very slow in the early stages and occasionally a pacesetter like Get Smokin or Tiberius Mercurius can squirt away to a lone lead and just have too much left when the real running starts happening late.

These horses have never won a race and are up for sale. They represent the lowest condition level on the grounds. Combine that with the chaotic nature of turf racing and this is a race where players are likely to want to include as many runners as possible,

Bella Principessa looks like a likely contender being drawn outside and running a bang-up last race that could be good enough here. The trouble is that she is also eligible and would need a scratch to get into the race.

Stormy Cat Lady gets Irad Ortiz Jr. aboard and makes her turf debut after 9 failed attempts to win on the dirt.

Lemon Taffy gets her 2nd career start and a jockey upgrade as she makes her turf debut for Mike Maker.

Leg 3- Churchill Downs Race 7: Maiden Special Weight at a Mile and 1/16th on the Dirt

The difference between maiden special weights and maiden claimers is that these horses are supposed to be primed to go on to bigger things such as top allowance races and stakes once they get their first win.

The field features a number of horses who were well backed in their last performances. This can sometimes be an indicator that the horse was better than their run indicated. These beaten favorites include Shoshoni Moon, Closet Shopper, Seaside Retreat, Bold Tactics, and My Pharoah Lady.

Although the horse is winless in 10 starts Kizzy B will likely be a part of the early pace scenario and if the setup is right perhaps Florent Geroux can get this four-year-old filly her first winner’s circle picture.

This race includes a number of horses who have flirted with graded stakes types, but none have found the winner’s circle against such prestigious company. However, they are all now running at a level seemingly much more on par with their ability.

The one-turn mile at Churchill can often favor speed types as is the case in many dirt races. Post position can play a smaller factor in these types of races because jockeys often try to get into position before turns. In a one-turn mile, they have the entire length of the backstretch to find the right spot.

Past performance indicates that My Sixth Sense will likely be on or near the lead. On paper, Big Dreaming looks to be the other potential pacesetter.

If the race gets fast upfront, it could set up for midpack horses like Empty Tomb or Guest Suite, and if things really fall apart look for Thirstforlife to be trying to make an impression late.

Leg 5-Churchill Downs Race 9: Keertana Stakes at a Mile and 1/2 on the Turf

These marathons on turf are few and far between but presenting an interesting handicapping challenge. It would seem logical that front runners don’t win these races because of the length which would seemingly tire out the front runner, but remember that all horses are running the long-distance which can also take the edge off of closing kick.

The race looks fairly competitive with a few horses that looked primed for a good showing. Dalika looks to be the likely pacesetter and could have the lead to herself which could produce a merry-go-round finish in which the horses do not change order at any point around the track.

If a horse is going to come off the pace, Delta’s Kingdom seems an obvious choice coming from mid-pack. In the event of a total pace collapse, First Course and Temple City Terror have both shown ability to crank up the engines late in these long-distance affairs.

For a more complete picture of each of the races in the cross country pick 5 and all of this weekend’s action check out Daily Horse Picks handicapping tools. Premium packages are available starting at just $4.99 for an entire day of racing at tracks around the country and can be purchased at dailyhorsepicks.com/buy.