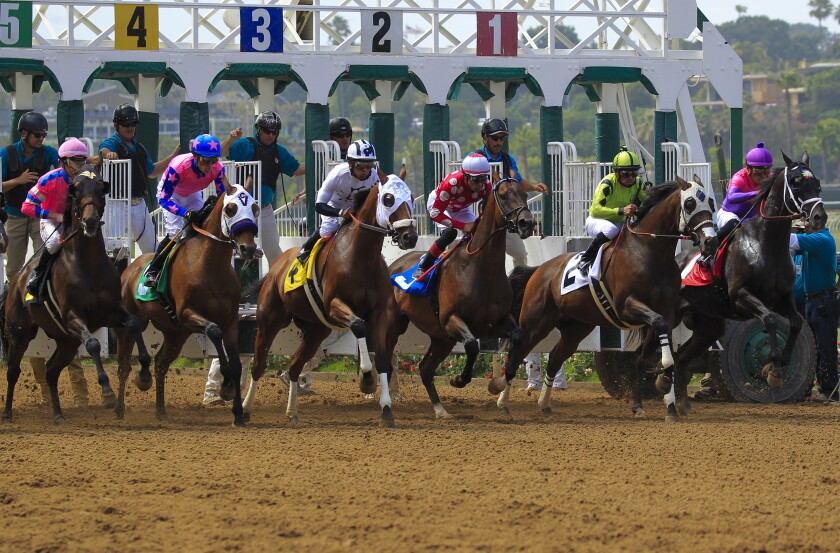 Del Mar's annual fall meet Thanksgiving weekend will play host to seven exciting turf stakes that, this year, has already seen palpable interest from stables and trainers all over the country. Ahead of that, here's a brief recap of events that have already taken place.

With his jockey Victor Espinoza aboard, Red Flag raced out of the gates to finish the quarter-mile in 22.73 seconds. Down the backstretch, four horses, including Spielberg and Red Flag, were neck-on-neck in a tussle for the lead.

By the half-mile-turn however, Red Flag had already begun to build a small lead on the rest of the pack, finishing the half-mile in 45.34 and opening up a more substantial gap towards the quarter pole. Being the consummate closer, Red Flag never looked back as he widened his already considerable advantage over the pack in the final stretch - holding on for a comfortable win in the seven-furlong race.

Behind him in second and third place respectively were Uncle Boogie and Maiden Ambivalent. The Bob Baffert-trained $1m auction purchase, Spielberg, could only muster a disappointing fourth-place finish.

This victory is, no doubt, a memorable one for his trainers Jerome and Tina Moss because Red Flag's record going into the race wasn't particularly strong.

Red Flag is expected to return in a month for the $200,000 Los Alamitos event. However, the tone of his trainers casts an uncertain shadow over the horse's eventual attendance.

According to Jerome Moss:

In Other News, Big Plans This Year for Del Mar Thanksgiving Weekend

As is its usual tradition, Del Mar will wrap up its fall meet with Thanksgiving Weekend. The four-day event colloquially known as "Turf Festival" will see a wide variety of turf races including the Matriarch Stakes and Hollywood Derby - each with a $300,000 purse.

The Del Mar racing office has come out to confirm that ahead of the event, many high-profile stables across the East and West coasts have expressed a desire to ship their horses over to compete.

On the 29th, the $300,000 Matriarch event for mares and fillies will take center stage and, alongside other supporting races, will close out Thanksgiving weekend at the Del Mar fall meet.