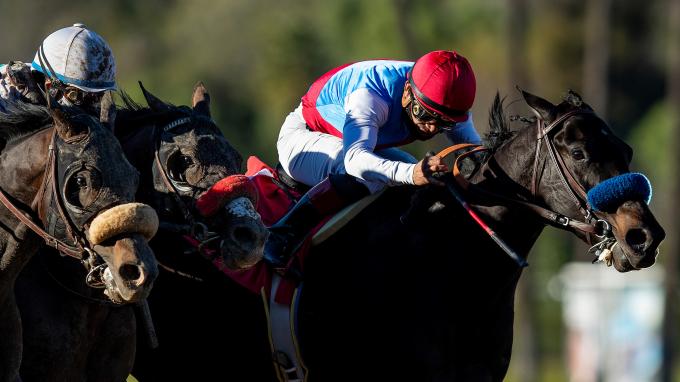 The Santa Anita Derby has been a crucial race for the Kentucky Derby in years’ past. It has always been seen as the premiere West Coast Kentucky Derby prep race and will guarantee the winner a post on the first Saturday in May. Bettors would be wise to pay attention to this race as the winner has gone on to win the Derby 10 times including triple crown winners Affirmed and Justify. Losing the race however does not mean an end of Derby dreams as seven Kentucky Derby winners were beaten in this race before getting to the winner’s circle at Churchill Downs. Among those was last year’s Derby winner, Authentic.
Triple crown winning trainer, Bob Baffert, has won this race nine times including two of the last three. Baffert has three probable entries in Roman Centurian, Defunded, and Medina Spirit in this year’s edition.
Santa Anita Derby Picks

Medina Spirit is 2 for 4 lifetime with the two losses coming in second place finishes to Life is Good who is off the Derby Trail. This one is likely to be the shorter price of the Baffert trained horses come Saturday.

Other listed probables include: The Great One, Parnelli, Law Professor, Outtothelegend, and Back Ring Luck.

When handicapping this year’s edition of the Santa Anita Derby, there are a number of things to consider.
The first significant item of note is that many of these horses have already faced each other in previous prep races. Given the horses' young age they are still developing and these previous results may or may not be repeated depending on how the horses have matured since the last effort. For this reason class may not play as big of a role in the outcome as it might when facing foes from other circuits or when these horses start to enter their four year old seasons.
Another factor in determining who will win this year’s edition will be the speed and pace setup.
Daily Horse Picks' speed bias analysis shows that at Santa Anita horses with a speed designation of “fastest” have fared the best. This result has been amplified when a horse rated fastest also has a pace designation of “leader” or “deep closer”. These designations can be found on each race page on DHP.

Stamina will Play a Major Role

For many of the horses in this race the nine furlong distance will be the furthest they have ever traveled so stamina will likely play a major role in the race’s final moments.
With so many unknowns in the race, young horses rapidly developing, longer distances, etc, it may also be helpful to find the best connections. A well timed ride by a top jockey may just be enough for the winner to get across the wire. A trainer with a history of getting horses ready for the Derby may have the workout regime to put a little more stamina into the horse as the stretch out.
A horse with both of these in his favor may be able to separate himself from the field. This year’s contest will include a number of the best riders and trainers at Santa Anita including leading jockey Flavien Prat and the aforementioned trainer, Bob Baffert who will likely end up with two or three in the starting gate. Daily Horse Picks has winning statistics for each jockey and trainer as well as their in-the-money percentages which can be vital to determining horses that will round out exacta, trifecta, and superfecta wagers.
The Santa Anita Derby has historically had a significant impact on the run for the roses, particularly in recent years, and the 2021 edition appears on paper to be no different.